Rep. Dunnigan has moved from updating this blog to a new website! There is no longer a ".blogspot" within the URL. Click the link below to continue following Rep. Dunnigan. Thank you for your constant support! 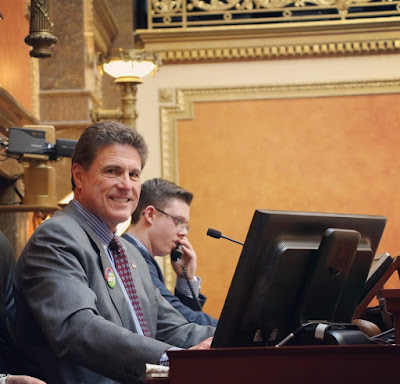 Posted by Rep. Jim Dunnigan at 2:42 PM No comments:

On Friday, March 25th, Governor Gary Herbert signed Rep. Dunnigan's bill, HB 437. The passing of HB 437 through the legislature was a monumental moment during the 2016 legislative session. Rep. Dunnigan's Health Improvements Initiative will provide full Medicaid coverage for 16,000 individuals within the coverage gap. The chronically homeless, recently incarcerated, and those suffering with behavioral health issues will qualify for this new coverage. Below are photos from the public signing of the bill at the 4th Street Clinic in Salt Lake City. 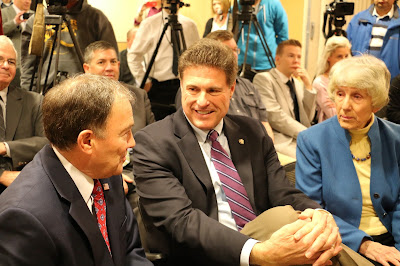 Rep. Dunnigan had support from Governor Herbert and Pamela Atkinson, an advocate for the homeless. They both spoke at the bill signing event. 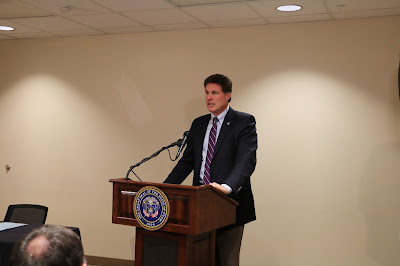 During the bill signing ceremony, Rep. Dunnigan said, "To the mayors, and the governor, and all the rest, I thank you. I am excited. And certainly to those 16,000...what an opportunity to change their lives forever." 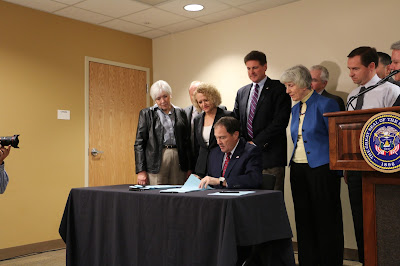 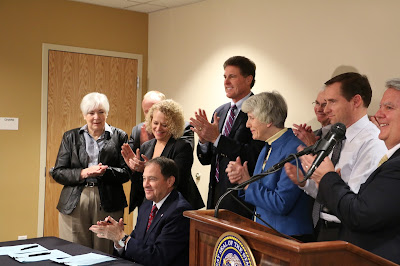 After months of tireless service, this coalition of supporters and legislators is happy to see it is all paying off. 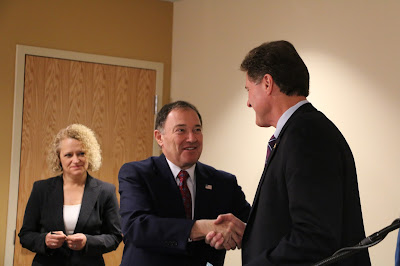 Governor Herbert shook Rep. Dunnigan's hand as he gave him a ceremonial pen and signed copy of the final bill. 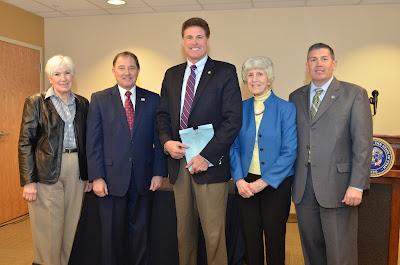 What a great day for this caring team of men and women!

Posted by Rep. Jim Dunnigan at 9:24 AM No comments:

Yesterday was an important voting day in Utah on a national leval, as well as a local level. Utah citizens voted in the presidential primaries and in the district delegate elections.

Rep. Dunnigan thoroughly enjoyed talking with many of his constituents last night at their local caucus meeting held at Taylorsville High School. He had a great team of family members and friends helping him spread the word about his re-election campaign. He wanted everyone who attended to know how thankful he was for your participation! 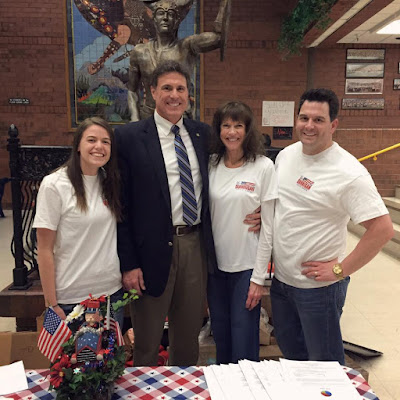 Posted by Rep. Jim Dunnigan at 1:20 PM No comments:

Rep. Dunnigan is in the midst of the craziness that is the last day of the session. Voting began at 8:00 a.m. this morning and won't end until 12:00 a.m. tonight. Here's a quick snap shot of the week. 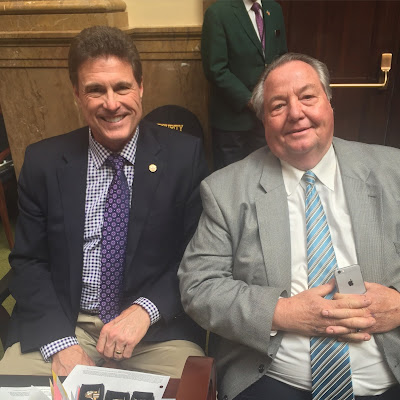 Rep. Dunnigan was grateful to spend quality time on the House Floor with Mayor Johnson from Taylorsville on Monday afternoon. 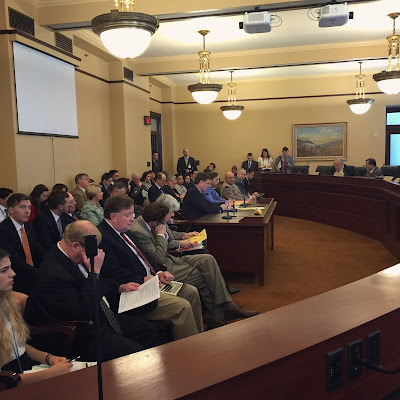 Rep. Dunnigan presented his HB 437 Health Improvements Initiative to Senate Health and Human Services Committee on Tuesday morning. Later that day, HB 437 passed through the Senate as well with a vote of 19 - 7. 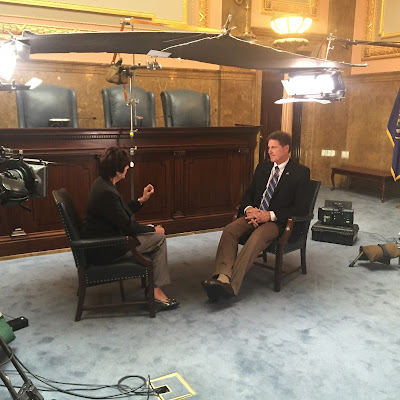 Comcast Newsmakers interviewed Rep. Dunnigan on Wednesday morning about the passing of HB 437 Health Improvements Initiative. The interview was held in the Supreme Court Chamber. Watch the interview on Comcast Cable Channel 6. 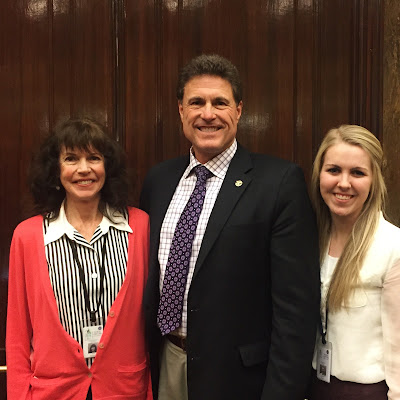 As this legislative session comes to a close, it is tradition for the spouse to come sit on the House floor. Rep. Dunnigan is grateful for his supportive wife, Vicki, and his intern, Jenessa. It's been an incredible 45 days!

With one week left, Rep. Dunnigan is working hard to pass his bills before time is up. He's had a really good week. Scroll through this week's picture update! 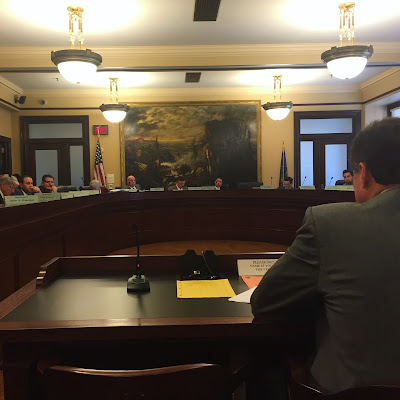 Last Monday, Rep. Dunnigan presented one of his bills in the Business and Labor Standing Committee in the afternoon. Many people showed up in support of HB 437: Health Improvements Initiative. The bill passed with a vote of 9 - 4. 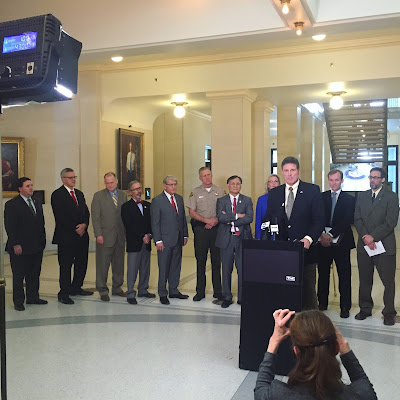 Mayor McAdams and Mayor Biskupski held a press conference Tuesday in the Hall of Governors in support of Rep. Dunnigan's Health Improvements Initiative (HB 437). Other legislators came to stand in support as well. 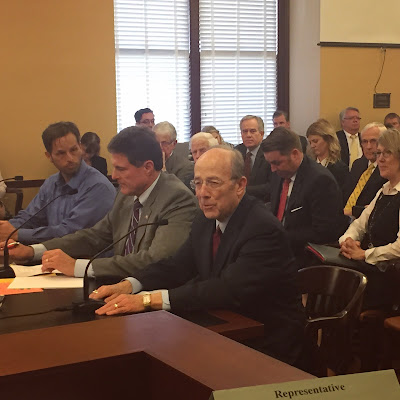 Rep. Dunnigan has continually worked on gaining support for HB 437 Health Improvements Initiative. Follow this link to read the comments of Keith McMullin and Kimal James at the committee hearing on the bill. 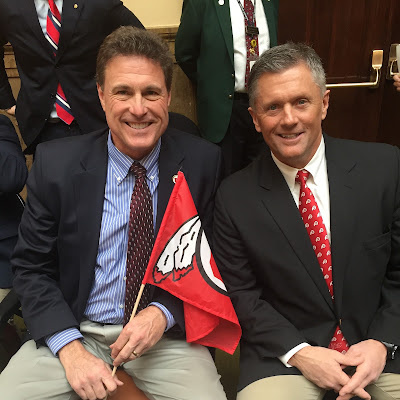 Rep. Dunnigan loved this House Chamber visit from Coach Whittingham, the football coach up at the University of Utah. The coach even signed Rep. Dunnigan's football. 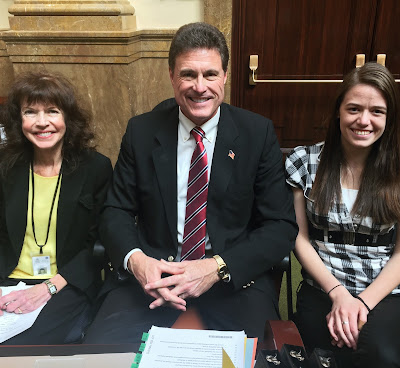 Rep. Dunnigan had his own little support team with him on Friday as he presented HB 437 Health Care Revisions to the House Chamber. The bill passed the House with a vote of 54 - 17.
Posted by Rep. Jim Dunnigan at 2:35 PM No comments: 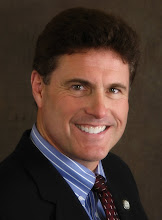 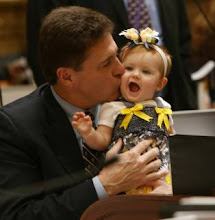 Representative Dunnigan gives his 10 month-old granddaughter a kiss on the last night of the session. 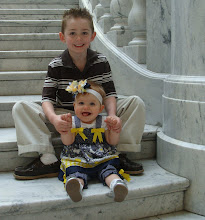 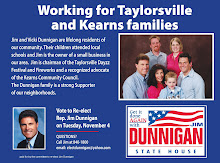